Heavy NBC protective suits made of rubberised fabric as well as gastight one-way suits made of different plastic foils have one common point:

At high ambient temperature the temperature inside the suit rise up within a short time to 60 – 70°C and the humidity to 90 – 100%.

However, owning to the gas-proof design of this protective clothing, the time it can be worn may be restricted to a few minutes depending on the ambient temperature.

With the protective NBC-ventilation equipment the wearing time at high ambient temperature increase up to 4 hours two time a day with a rest of 2 hours.

Through the air distribution system of the protective clothing with the protective ventilation unit SAB-87, filtered air is blown into the interior of the suit while the necessary breathing air is conducted to the gas mask at the same time.

In connection with the air-distribution system installed in the suit, its interior is not only evenly cooled to a bearable temperature; the moist air simultaneously abducted via discharged valves, thereby creating an acceptable environment.

The breathing resistance normally occurring during mask breathing is eliminated by the simultaneous breathing support. This protective device was developed and tested close with and delivered to the Austrian Federal army and is now in service in 24 armies in Europe, Near and Far East and South America. The unit is worn on the field belt and hardly encumbers the bearer thanks to its small size and low weight. 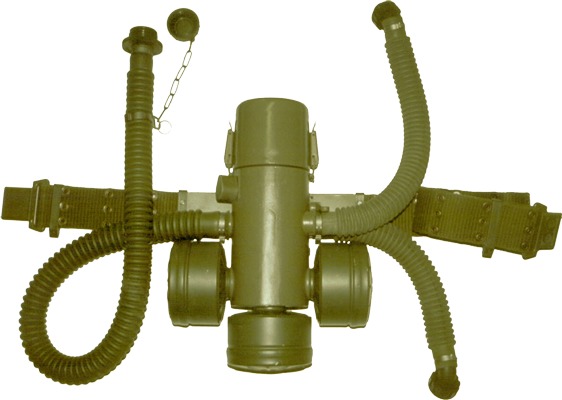 Wholly made of light metal with 3 screwed filter connections and varnish that is resistant to warfare agents and can be easy decontaminated.
All other materials used meet the test requirements of the Austrian Federal Army for NBC war materials.

Separate fresh air feed for jacket and trousers (can be shut off !) breathing tube to the protective mask with traction relief.